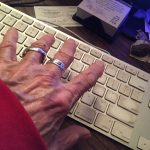 Against the ruin of the world
there is only one defense: the creative act.   —Kenneth Rexroth

How do we understand the ruin of the world? Where do we find it? This morning, I found part of the ruin in the Los Angeles Times. No hyperbole. Not one extra word. Just writing which razored me from my Self.

My French neighbor Sylvie knocked on my apartment door the other night, asking if I wanted a motorcycle helmet. It was brand new, a gift from her ex, and she knew that my husband rode a motorcycle — did we need an extra helmet?

I thought perhaps she’d been watching “Tidying Up with Marie Kondo,” on Netflix, where the soft-spoken Japanese superstar of de-cluttering instructs people to purge their closets and lives of items that don’t “spark joy.”

On Instagram, my friends are proudly posting pictures of piles unwanted clothes on the floor and “after” snaps of their newly immaculate closets, having binge-watched Kondo’s show.

I tried it too. The weekend before Sylvie came over, I took everything out of our kitchen cupboards, and held up the cheap wine glasses I’d bought on Gilt, asking “Do these spark joy?” It’s a lot to ask of a wine glass. (They went in the giveaway pile.)

But my neighbor wasn’t Kondo-ing. At 53, she was being evicted.

Standing in my doorway, she gave me a quick rundown of what had happened: She and her partner split, he moved out, taking a large sum of her money with him. Her interior design business was floundering — three clients had bailed in one month. She got a roommate, but then had to replace the rent-sharer with her adult son who got out of rehab and had no place else to go.

Everything hit at once, and she was unable to pay rent for three months and now she was being evicted. She wasn’t asking for pity, but she was struggling.

She had decided her best option was to end her life, but then she had second thoughts and went to a downtown public health clinic. She looked around at the other women in the waiting room. “All homeless,” she told me. She realized she was now one of them. She saw a doctor, got meds, was feeling a little better.

Which brought her to my door, with the motorcycle helmet. It was new, and such a waste to trash, she said.

I followed her back to her place, volunteering to help clean, as she had to be out the next day. Standing in her half-empty apartment, I thought of Kondo’s show. A lot of what remained of Sylvie’s possessions sparked joy. It was all going into the trash anyway.

“These have been in my family for over 50 years,” said Sylvie, handing over matching rose-colored ceramic bowls, and a special dish just for strawberries, with tiny holes in the bottom of the top plate, allowing water to drain through, so the strawberries stay firm. “Very French,” she said.

There were Baccarat crystal glasses that had been part of her grandmother’s wedding trousseau. She clicked two empty champagne coupes together and they made a clear, ringing song that my glasses could never aspire to.

Wait, I thought. Where’s Lulu, the German shepherd Sylvie brought home as a rambunctious puppy a few years back. “Don’t jump, Lulu,” she’d say. As if not understanding the thickly accented English, Lulu always jumped anyway. Now, Lulu was mammoth, dragging Sylvie daily by her leash. But that night in the apartment — no Lulu. I decided not to ask.

As we swept dust and dog hair in the empty rooms, Sylvie finally volunteered. Lulu was at a boarding facility. Sylvie broke down in tears. “They said they would find her a good family,” she told me, and then she couldn’t speak any more, bawling in my arms.

How could she keep Lulu if she didn’t have a home? She spoke again about wanting to end her life. I told her she made the right decision to see a doctor, that we could get her help.

Women alone and over 50 are one of the largest homeless populations in the city, and their numbers are growing. What are the support systems for someone who abruptly finds herself destitute? Sylvie had lived in L.A. most of her adult life; if she’d stayed in her native France, I can’t imagine she would have found herself in this position.

In the days that followed, Sylvie moved into a co-living house in Studio City that she shares with nine strangers.

We watch and emulate Marie Kondo tidying and organizing, but I wonder if we’re preparing for something much bleaker. Privilege is the precondition for getting rid of stuff, but I set our liquidation efforts against the backdrop of a horrific housing crisis in L.A. It could take any one of us down quickly.

Life here is becoming untenable. I love this city,

but I don’t know how much longer I can afford to stay.

Cole Kazdin’s reporting and essays have appeared in Vice and the New York Times. She won four Emmy Awards as a producer for ABC-TV’s “Good Morning America.”
****
And here, from writer/photographer Theresa Souers, a reminder:  “We think we are “above” instant judgements but sadly, not the case.  And as soon as a conversation begins, the shift to discovering the real person “behind the mask” begins.  Once the “person” is discovered, the mask is no longer seen.”

Reader, writer, I hope you will challenge the ruin of the world. I hope we will read your words.