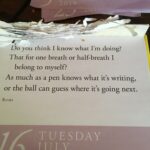 I used to read articles on suicide bombers in other countries and wonder what it would be like to be afraid to go to the store, a coffee shop, a shopping center, a clinic.  Now I know. I got out of my car in the parking lot mall and realized my heart was racing. A young white man walked past me. His head was shaved and he wore fatigue pants and a t-shirt. I almost got back in the car and didn’t.

I commented in the New York Times: I imagine that there is one person in my country who could sign a presidential order to ban assault weapons. I may be wrong, but if that is the case, and that person does nothing but utter empty platitudes, then that person is a domestic terrorist.

I wonder if you find yourself more afraid than you were last week. Please write about how you feel, what you imagined yourself doing, and what you want to do. If you want to go farther, here are gun control website links. (In America, change cannot happen without human support.

The Brady Campaign: Named after Ronald Reagan’s assistant who was shot and nearly killed by John Hinckley, this group scored a major victory in the 90s with the federal assault weapons ban.

New Yorkers Against Gun Violence: Formed by grieving mothers in the wake of a Prospect Park shooting in 1993, NYAGV has grown from a Brooklyn-based organization to one with branches in 27 counties around the state. Despite the fact that New York has strict gun laws already, we can’t take it for granted. NYAGV also lobbies at the federal level for gun control.

Everytown for Gun Safety: Formerly Mayors Against Illegal Guns, Everytown for Gun Safety is now a coalition made up of Mayors Against Illegal Guns, Moms Demand Action for Gun Sense in America and survivors of America’s many gun violence incidents. Together, they lobby for gun control legislation on a local and federal level, as well as provide a support network for gun violence survivors.

The Coalition to Stop Gun Violence: Is this the most reasonably-named group in the history of American politics? Possibly, yes. The CSV is an umbrella organization of 48 national groups that seek to free the nation from gun violence through policy advocacy, research and strategic engagement.

Violence Policy Center: Even the NRA is a little afraid of these guys, branding them “the most effective, and most untruthful anti-gun rabble-rouser in Washington.” VPC has worked on campaigns from the Brady Bill to taking a stand against concealed carry permitting, filling Washington with reports on the dangers of unregulated gun ownership, challenging the NRA head-on and being a nuisance for anyone looking to make the Second Amendment into a license to carry any and every weapon under the sun.

Americans for Responsible Solutions: Started by former Congresswoman Gabrielle Giffords in the wake of her own brush with death after being shot, ARS is focused on “commonsense” solutions to America’s widespread gun violence issue. Giffords and her husband Mark Kelly call themselves Second Amendment supporters, but are also committed to lobbying for expanded background checks, stiffer gun trafficking penalties and funding studies and research on the causes of gun violence. D