We have brought the Plague on us. The Plagues. Our species is filthy – yep, here I go again, and here’s why: 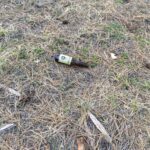 I found this Corona empty in the forest. There are dozens of stories about its origin. You go first. You send yours, and I’ll send mine next week. Send your double-spaced writing in Word Doc to shebetsherlife@gmail.com. Let me know if you’re willing for it to be published. Thanks.

And, here is faithful writer, Theresa Souers: Frankie had been waiting in the driver’s seat of the faded blue Subaru he had inherited from his Granny.  The blue was his upon receipt.  The dents, chipped paint and cracked windshield followed.  He had been waiting for over five hours.  There was nothing he could do but wait per the instructions his older brother Raymond had pounded into his head.  “You want in, you prove yourself”,” Ray shouted three inches from Frankie’s face, spit sprayed with the word prove.  So he waited.  The rain came down in sheets, pounded on the roof of the car and created impressionistic images through the windshield.  When he first arrived at the drop off location, he had run into the Circle K across the street for a pint of mint chip chocolate ice cream.  The ice cream was gone.  The rain, not so.  He had been out of his mind with boredom but under no circumstance was he to leave until his job was completed.  He had noticed a disheveled looking man lingering about 50 yards behind the Subaru that appeared to be concentrating on a cell phone.  It was obvious to Frankie that the guy had not been talking to anyone, just staring at a screen.  It seemed weird.  Frankie could feel his heartbeat accelerate. The loiterer was wearing a red t-shirt with an emblem of a large black fish hook across the back.  Finally, the guy put his phone in his pocket and began to walk toward Frankie.  “Was this the contact?” he thought.  “I was told there would be two in a white Toyota Tundra.”  At the point when the guy was within a few feet from the car, he turned, forty-five degrees, looked both ways and crossed the street headed toward the Circle K.  Frankie’s heart beat slowed down as he forced himself to take a few deep calming breaths.  He found himself mesmerized by the fish hook design as it jiggled in cadence with the dude’s long step.  His mind wandered back to a memory when his Pa was trying to teach him to tie fishing knots.  Pa had been furious when he came home one day to find Frankie sitting against Granny who in turn was teaching Frankie to knit.  Frankie loved to watch Granny knit  He could watch her for hours and remembered being joyous in doing so. They would sit side by side, her telling stories of her youth, he watching her hands manipulate the needles.  “Frances,” she asked on day.  “Would you like to learn how to do this yourself?”  Frankie remembers feeling incredibly important.  She had put her hands over his and gently led him throught the process used to create the intricate knots.  She had taught him to knit one row and to purl the opposite.  She had shown him how knitting two, purling one would create a pattern.  Yarn-overs would result in extra stitches while knitting two stitches together would decrease the count.  He delighted in the craft and looked forward to future visits with Granny to see what he would learn next.  This all came crashing down though the day Pa caught them in the act.  “What the hell do you think you are doing?” he had screamed at Granny.  “You trying to make my boy a wuss? Boys don’t knit.” Unfuckingbelievabe.”  Frankie had panicked for a moment fearing that Pa was going to whack Granny across the head. But he had just glared at her with a look that to this day frightened Frankie.  The whack did come however across the back of Frankie’s head.  “You want to learn knots, I’ll show you knots.”  That was when the lessons to tie fishing line began.  There were more whacks over the years but no more knitting.

As Frankie reminisced, he wondered if it were possible for him to still knit.  He looked all around the car, under the seats and in the glove box to see if there were any makeshift tools.  He settled with a pencil and an old straw for needles.  He found a roll of twine used for strapping boxes together in the glove box.  He figured it would suffice.  As his improvised knitting tools lay in the car seat next to him, he racked his brain as to how to begin. “Ask Google.  Google knows everything” his little sister’s mantra came to him.  He checked his signal and found he was good to go.  He typed in “how to knit” and bam, a slew of links popped up.  The third one down was a Youtube video which he figured would be the best way to go.  Prior to the video beginning, an ad popped up.  To his shock the ad was for a testosterone product.  Frankie turned the phone face down and into his lap as he instinctually looked around to see if anyone had noticed.  “What the hell?” Franking had murmured out loud.  Could the damn internet know that it was weird for a dude to be looking up instructions on knitting?  Did it think he needed some help with his manhood?  When Frankie turned his phone back to the screen, the ad was over and a perky blond woman with a bright red sweater and fingernails to match was demonstrating the process of casting on stitches.  He drug the curser back to the beginning of the video and watched closely.  “What’s with the accent?” he wondered.  “She sounds like one of those half naked warrior chicks in Game of Thrones.”  He drug the curser back once again and studied how she held one needle in the left hand and made a loop with the yarn.  She then brought the yarn through the loop which created another loop with a knot at the end.  She slid the knot onto the needle and pulled the yarn to tighten the knot.  Next she wrapped the yarn coming from the ball around her thumb which created a loop around her thumb.  She brought the needle under and up through the loop and around her thumb.  Finally she removed her thumb from the loop and pulled the yard to create the next stitch. He watched her repeat the process four more times, clicked on the pause button and sat the phone down.  He picked up the pencil and the kite string and carefully copied what he had seen.  It worked.  The muscle memory came rushing back and he continued until he had about 20 stitches on the pencil.
Frankie continued to watch the video as the speaker demonstrated the basic knit stitch.  Here she held the knitting needle with the stitches she had just cast on in her left hand.  She emphasized the important of having the yarn coming from the ball, (she called it the working yarn) be kept at the back of the work.  She inserted the right needle into the first loop on the left hand needle.  She followed by pushing the needle through from the front to the back.  She then wrapped the working yarn counterclockwise around the right hand needle, bringing it between both needles.  With the yarn still wrapped around the right needle, she brought that needle through the first loop on the left knitting needle and pulled the stitch through the loop on the left needle.  To complete the stitch, she carefully dropped the first stitch off the left knitting needle.  As he slowly traced her steps he found the straw to awkward due to the non-tapered end.  He pulled his pocket knife out of his pocket and tried to cut the ends to work better.  It didn’t help but he was able to make do.  Frankie finished the row and then repeated the patternfor four more rows.  He then Googled how to do a purl stitch.  This time a rather nondescript older woman was the instructor.  With her slow drawn out words she demonstrated the purl.  Instead of taking the needle from the front of the pattern, the purl required poking the needle from the back of the stitch through to the front.wrapping the yarn around the needle and twisting the needle back through the loop.  This step was a bit clumsier but after a few tries, Frankie got the hang of it.  All matter of time and boredom passed as Frankie immersed himself with his rediscovered love of knitting.  The sound of gravel crunching behind him slammed Frankie back to the reality of his situation. His smile dropped as he looked into the rear view mirror.  His vision was obscured but it was clear that there were two individuals in a white truck behind him.   When he saw the doors on both sides of the truck slowly open, Frankie used as little movement as possible to stuff his project between the two front seats with his right hand.  His left hand slid toward the side door panel the driver side of the car and he slowly wrapped his fingers around the Glock.

← Fill at least one of the holes in our not-so-brave new world: write now…
Wildness: Now More Then Ever: Breakthrough for the week of 5/18/2020 →