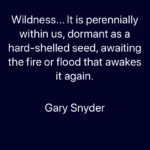 Poet Gary Snyder has always invited us to walk the the Way of the Natural World, the Way of the Wild Unknown. Wild cannot survive on social media. It will never be given a seven figure advance. Wild cannot be licensed or commodified, though our capitalist corporate “culture” does its best to get rich off our longing for the Wild.
Where, in these frightening days which challenge our illusions of control, where do you occupy your wildness? You already know that to write is to be guaranteed entry into a wilderness. No map. No cell reception. No Way Out. Tell us.

Rain has all but stopped. It is still sprinkling but nothing like the heavy downpour of the past few hours. Now, skies are gray and foreboding. Plus, there is a distinct chill in the air. It does not feel so cold as it feels wet.

While waiting for my friend, Alistair, to finish his huge banana split, I am practicing my favorite sport, people watching.  I like watching youngsters bouncing along with anticipation beside their parents. They are doing their best to keep all that energy under control. Watching teenagers is fun, too. Some are trying to be so cool and grown up. Others are like; “Here I am, ready or not.” They just want their ice cream.

While watching the ever-changing parade of people, I notice a fella in a very red shirt. Quietly sitting on a bench under an overhang, he is not in a hurry to go anywhere. One thing for sure, his red shirt stands out against the dreariness. What could he be thinking sitting there holding an empty sundae dish and sucking on a plastic spoon? Maybe, I thought, he is contemplating another dish of ice cream. Is he deep in thought? Or is he not thinking about anything in particular? Quite possibly, he is a people watcher, just watching the world go by.

Maybe he is a loner. Is he regrouping after an encounter with a friend? I wonder, does he have a wife and children? It is hard to guess how old he is. Did he drive here? Since there are passing showers, why isn’t he sitting in his car? Even though rain has stopped it is still damp and chilly. The car would be warmer against the damp air. But, then again, maybe, his red jersey with long sleeves keeps him from feeling cold.

Alistair is about two-thirds done with his bananas and ice cream. I am thinking I should have ordered a large instead of medium cone or better yet, a large hot fudge sundae. I am a bit envious of all that gooey looking ice cream with chocolate and caramel syrup. Alistair’s grunts of pure pleasure make me feel like I am missing something.

Deciding I need a distraction from Alistair and his decadent dish, my eyes drift back to the red shirt and the young man wearing it. I decided he must be a young husband and father. From my vantage point across the parking lot, he looked to be in his twenties. Although he seemed to be watching the comings and goings, he did not appear to be reacting to anyone.

I decided that Mr. Red Shirt was probably married. And, possibly, he was a father to a young child. Was he overwhelmed with being a new father and needed to clear his mind? He did not seem to angry. He probably just needed an inconspicuous place to just be.

Alistair has finally finished his ice cream. He always wants to have a treat, as he calls it, at the end of the work week. And it usually is ice cream.  I surmise it’s his way of letting go of what happened during the prior five days. Most of the time it is an ice cream cone. Maybe his week has been rough and needed the banana split to fix it.

We finally drive on to the shopping center. After our last stop at the big box hardware store, we head back the way we came. Rain has started again. Not hard rain, but rain. Skies are still gray. We pass by the ice cream shop. Youngsters, parents, and teenagers are still scurrying to get a treat. I look to see if Mr. Red Shirt is still sitting under the overhang. Nope, he has moved on. My mind is still pondering the young man. I will just have to wonder if my thoughts about him are even close to the reason why he sat there, under the overhang, in his very red shirt, alone.