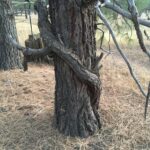 What if: you couldn’t bear being inside four walls another second? What if you so
desperately needed to breathe the air of the possibility of surprise that you turned away from the screen – any screen – and ran outside? What if the snow came up to your knees? What if rain slammed down on your head? What if a craze of ravens flew overhead, their shadows leading you toward the trees? What if you kept moving? What if you raised your eyes from the ground and witnessed an embrace?

“It’s cold here in the city…” * John Denver’s voice wafted in and out as she sat watching the moon move between the buildings. Margo was not homesick, or was she? “It always seems that way…” * Margo had a small chuckle slip from her lips. John was singing for a love that had drifted away. Her mind kept drifting back to the porch in her desert home. Seeing moonrise in the desert was much more mesmerizing than moonrise in a city. Soft shadows would seem to float over the cholla and mesquite. In the background she would hear pumpjacks in the distance dipping their heads bringing black gold to the surface. Closer she could hear the scamper of tiny feet as the desert mice hurriedly moved about. Every now and then a night hawk cry or owl hoot pierced the moonlit scene. It was the alarm cry to desert critters. As her mind drifted, sirens sounding alarm in street traffic brought her back to the present. “I’m sorry for the way things are in China…” *   With a small sigh, Margo thought her desert was further away than China. A whiff of diesel invaded her space. Margo thought to herself how obnoxious city smells could be. Again, she found herself comparing them to what she calls desert aromas. The moon had moved to where it was visible between buildings. It looked smaller than it had looked a bit earlier. Memories of riding her horse home in the moonlight, Margo would stop and just watch the moon rise not obstructed by buildings. Once in awhile she could see the reflection on the deer in the distance. No tall barriers to the views. Deserts being bathed in soft light from above seems magical. Deserts and moonlight are made for each other. Margo decided she was a bit homesick. However, she thought, the moon is the moon no matter where you are.

← Go Easy on Yourself, woman: Breakthrough for this “Holiday” Season
What if #2: you were fully awake: Breakthrough Tip for the week of 1/20/2020 →